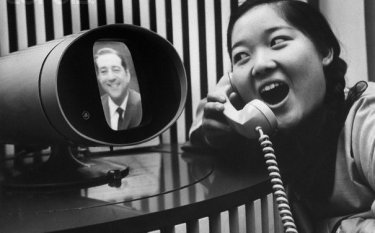 I once proposed a simple way to solve an gnawing problem to a group of Leaders.  The answer was summarily dismissed.  I heard a very clear message…”NO”!  The true resistance to the solution was a fear of change and the introduction of some new and uncomfortable accountability.

And that takes us to the Videophone…

At the New York Worlds Fair in 1964, AT&T (Bell Systems at the time) introduced its newest commercial technology.  The Video Phone.  The debut was the herald of a hopeful new era in personal communication.

It was quite simple.  To create a more human setting, the telephone would be paired with a close circuit camera.  When a call was placed on the Videophone, both the sender and receiver could see a video image of the person on the other side.

After introducing the Videophone to the mass market right after the fair, it bombed.  At its best, they had only 500 subscribers in the U.S.  No one wanted to get dressed up and stare at someone else every time they made a call.  It also required two expensive units for it to work.  It was discontinued in 1974.

In 2011, Apple introduced Face Time as its newest feature on the iPhone.  It is a run away success and is now the market standard.

Here are a few lessons to consider about the fall and rise of the video phone:

1) What is a great idea today, may not be a workable idea until the future is ready for it.  Go ahead and invent it anyway.  At the Walt Disney Corporation, they say “no good idea ever dies”.  Walt Disney thought up a ride called the “Seven Dwarfs Mine Train” in his original idea for a Mickey Mouse park in the 1930’s.  The ride opened at Disney World in new Fantasy-Land in 2013.  It was a good idea for an attraction then and it is a good idea for an attraction now.

2) Don’t ask those that are convinced they have something to loose to help you invent the future.  One of the reasons that the videophone failed was that it was invented and marketed by the phone company.  It have everything to loose from the videophone going off the grid and becoming a thing outside of the telephone.  So it went no further than the phone.  If you have a partner that is focused on what they have to loose, rather than gain from inventing the future, you will have an partner without earnest.

Just a little more change to Face Time will make it even more indispensable to you in the future. In the future, you will use face-time, or a like application, for tel-medicine.  You will talk with a health care professional that will check your vitals and communicate with you anywhere in the world.  The video phone has the potential to change the health of the whole planet in the future.

4) Being deliberate about the future is your only real option.

“Either you defend the status quo or you invent the future. Those are the two choices. We forget that the future does not care if we think about it. The future is coming. If all you have is a hammer, then everything looks like a nail. If you look at the future and think about how it helps what you have right now, you are going to completely misjudge the future.” -Seth Godin, 2011

So keep on proposing the future.  It sometimes comes with rejection and resistance.  But in the end, those brave enough to create the future, are the ones that make the world we need when the time is right.