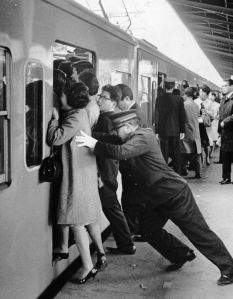 When I was a kid, everyone would rush and throw elbows to get to the front of the line.  The fear was that the ice cream would run out before you got there.  You hoped that you could get a few extra seconds at the playground or get the best seat at assembly.

Oh, and there was always “that kid”…the water fountain hog.  They would drink and drink until all the time was up, and everyone else had to go back to class thirsty.

This follows is into adulthood.  We rush to be the first one to the opportunity.  Some run over each other and throw sharp elbows to the be one at the front of the line.  Some are desperate to stay at the water fountain as long as possible.

Don’t get me wrong.  Being at the front of the line is fun.  But you can’t always get every award, win every battle and be the center of attention.  That is a difficult concept for high achievers and extroverts.

You don’t fail if you don’t always win.  My father told me once, “The sun doesn’t always shine on the same dogs rear all the time.”  It is OK not to win every race.  You don’t have to be desperate to stay a the water fountain as long as possible. Just a sip will do.  You will get enough to drink, and the other kids wont try to beat you up on the playground for being the water hog.

The difference between being last in line and first in line is simply a change in the direction of the line.